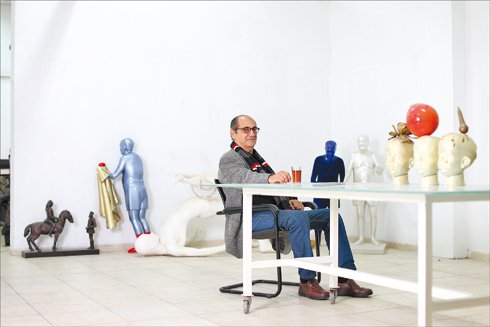 “I don’t deal with the visual experience – I deal with essence. Listening inside and outside is not a clear thing; because of it ideas start to take form. I can ‘see’ you and I can see your physical presence. I can look at you and I can ‘look’ at you in a scattered vision which the more it scattered it also has focus, because I can catch the essence and not to be captured by the material.”

I like this idea because I believe there is truth that goes with it. In general the smaller the things in our lives the harder is to make them perfect. Think about design. A 120 Sqm apartment in contrast to 20 Sqm apartment – how difficult is it to create a small space that captures its entire tenant’s life? How easy would it be to organize someone’s life in a larger apartment?

Or think about people. It is so easy to be impressed by someone’s “big” apartment, title or status that we can lose the person’s essence – who he/she is for real, without the masks. Starting from the “small” – or where the essence is – can give us a better understanding of what is in front of us.

Motti Mizrachi (born 1946) is an Israeli multimedia artist who was born in Tel Aviv. He represented Israel at the 1980 Biennale de Paris, the 1987 and 1981 São Paulo Art Biennials, and the 1988 Venice Biennale.

Mizrahi, who is crippled in both legs as a result of polio, uses a pair of crutches to walk check my source. His physical disability is an expressive component used in his work. His style is figurative and he has been greatly interested in the human figure together with symbols taken from reality, especially from animals. If you are interested to see his works you can visit his YouTube channel.