On March 26, the IE Arts & Business Club had the honor to host Alejandro de Villota Ruiz for an exciting speech on the “Art Nature vs. Nurture”. 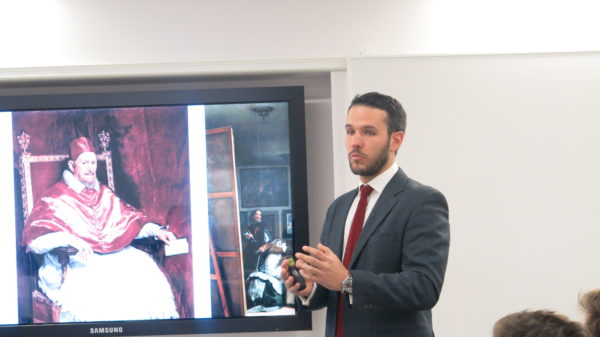 Alejandro is the son of the famous Spanish artist Javier de Villota and knows both the art world and the business world (as he used to be an investment banker).

In his speech, Alejandro took us on a voyage on pieces of art that touched him personally and he elaborated on the history of art and its changing narratives – from religious and spiritual motives in the Cave of Altamira, to the development of authorship under the patronage of the church, wealthy families and kingdoms (for example Diego Velazquez and his portrait of Pope Innocent X), to finally conclude with the development of the modern narrative of socio-political art, as described by numerous painters such as Francisco Goya, Pablo Picasso and Alejandro’s father Javier.

In the last part of his speech, Alejandro explained the development of arts as a business (for example with the foundation of the auction houses Sotheby’s and Christie’s) as well as market failures in the art world, such as the problem of asymmetric information in art trade. The event concluded with a very interesting Q&A session, with topics like the future of art reception and art trade (e.g. through Internet platforms).

The post was Written by Max Franke, one of our Art and Business Club’s members and was published in the club’s Facebook.