Artists, Entrepreneurs and designers, are you looking to leave London? Here is where you should go

I just read an interview with Rohan Silva on Dezeen. The interview was discussing the future of London creative industries and the risks involved. The example discussed in the article was the stream of artists and creative people leaving New York for LA, in which Silva says it is, “a cautionary tale for London;” and why? “Because the moment a city starts to lose its artists, things can fall apart and the city might lose its edge,”   Silva for these who do not know, was the former Senior Policy Advisor to UK Prime Minister David Cameron and the one is responsible for the TechCity initiative in East London, as well as boosting the London entrepreneurship ecosystem. Silva expressed his concerns for London’s Creative Industries’ future. I agree with every word and thought – it is relevant for every city, not only London. If you followed my blog in the past you have noticed that I’m a big supporter of the arts. I believe the creative people are the ones that boost cities and change societies; luckily there are many research studies around these topics that support this theory. So when I read Silva’s interview it made me wonder; if the creative industries are looking to leave London but still stay in the middle of the European action…where should they go?

I think I have a suggestion.

In the last 18 months I have been living in Madrid. I came here to study with limited knowledge about the city itself. Madrid is a city that takes time to discover and get to know but the moment you do, you fall in love. It is a great city to live, create, meet people and have fun. I live in the center of the city which has the typical beautiful Spanish well maintained buildings surrounded by chic bars, cafes and restaurants. The city has a vivid and lively art scene, with art galleries that bring international artists, Spanish Artists and Latin American ones as well. And the spaces for art!! Gosh, there are so many beautiful spaces for art and culture here. Visit Tabacalera, Conde Duque or Matadero, a huge slaughter house that has been transformed into a cultural center with a cinema, spaces for art fairs, cafés, designers’ shops and  hosts regular workshops and lectures. So If I try to follow Silva’s logic, if London is New York of Europe, Madrid could be the Los Angeles (Barcelona is a very good option as well – you decide).

When I talk about the creative industries I am talking about entrepreneurs as well. Whether it is creative entrepreneurs or tech entrepreneurs – any entrepreneur. I always claim that artists and entrepreneurs are alike (here’s why) and I think that these are the people that can change, flourish and grow a city; well, not by themselves, but they are major component in this process.

I will stop here to say few things; my post is not talking about finding a job in Madrid which can be quite challenging; this is another issue. Another important thing to know is that the big majority of the population in Madrid are speaking Spanish; English is not easy in here – but hey, what’s so wrong about studying a new language? The Spaniards are very welcoming and helpful and the English language is slowly becoming more and more common – so in the long run, things will change. In the short run, we can manage and let’s face it, with the global and digital world we are living in, you can live and work anywhere.

So why you should come to Madrid, you’re asking?

Yes, sun. It’s a sunny city with beautiful blue skies throughout the year, basically almost the entire year. The weather in Madrid is great. The winters, at least the ones that I have had, were simple compared to other European cities (and I’m coming from Tel-Aviv where I grew up next to the beach) and even if it is cold, you still have sun in the sky – which can change your mood, don’t you think? And summer in Madrid, is a real summer – no rain, no clouds, no umbrella – short pants, short t-shirts and sunglasses – for three months at least. You don’t believe me? See these two charts below:

the value for money in Madrid is high. You get much more for what you pay. Where in a central European city can you get a Caña (small beer) for one euro? Or have a full lunch including wine for 8€ or 9€? And the apartment’ prices? You can live in one bedroom studio in the center of the city (but I mean, real center, in neighborhoods such as Chueca and Malasana, not 20 min walking from the center) and pay 600€/700€a month. You can also have a 3 bedrooms apartment with a friend (80/100 sqr) for 1,200€-1,500€- a month, not a week. And when you enter to the supermarket? – Wonderful products and great prices!

Compared to other European cities, Madrid is a small scale city. In about 25 minutes you can be almost anywhere around the center including the airport! Which is one of the best that I know, since all the flights, including low cost, are located there and you have access to major destinations around the globe. So besides of course, an efficient metro (which you don’t need to squeeze in regularly and you only pay 54€ per month, if that even), train and bus systems that works almost all year around, all hours of the day and night (only buses). There are also the new city bikes, BiciMadrid, which, believe it or not, are electric ones. And it’s sooo nice to ride them and cruise the city in the sun. Even in winter it is totally useable (on average 7, 6, 10 days of rain in January, February and March respectively as you can see above)

in the last few years it seems that Madrid transforming to an entrepreneurship hub. I think a good sign for that is the new Google Campus that was opened in June 2015 and is the third one in the world after London and Tel Aviv. The Google Campus building is aimed to appeal to almost any entrepreneur. It is quite an impressive building, four floors, immense auditorium, large working spaces and houses many local and international entrepreneurs. Besides the Google Campus there are more and more startups popping up.

Business Schools like IE and IESE bring international business talent that fall in love with the city (confession, I’m one of them!) and looking to stay here. More accelerators and more business angels as well as small funds are growing as well. Now, don’t get me wrong here, Madrid is still not London, Silicon Valley or Tel Aviv, there still is an equity gap, difficulty in finding developers, and starting a company is costly yet I believe in the long run it will change. The graph produced by Novobrief shows it all – the investments are growing – and fast! 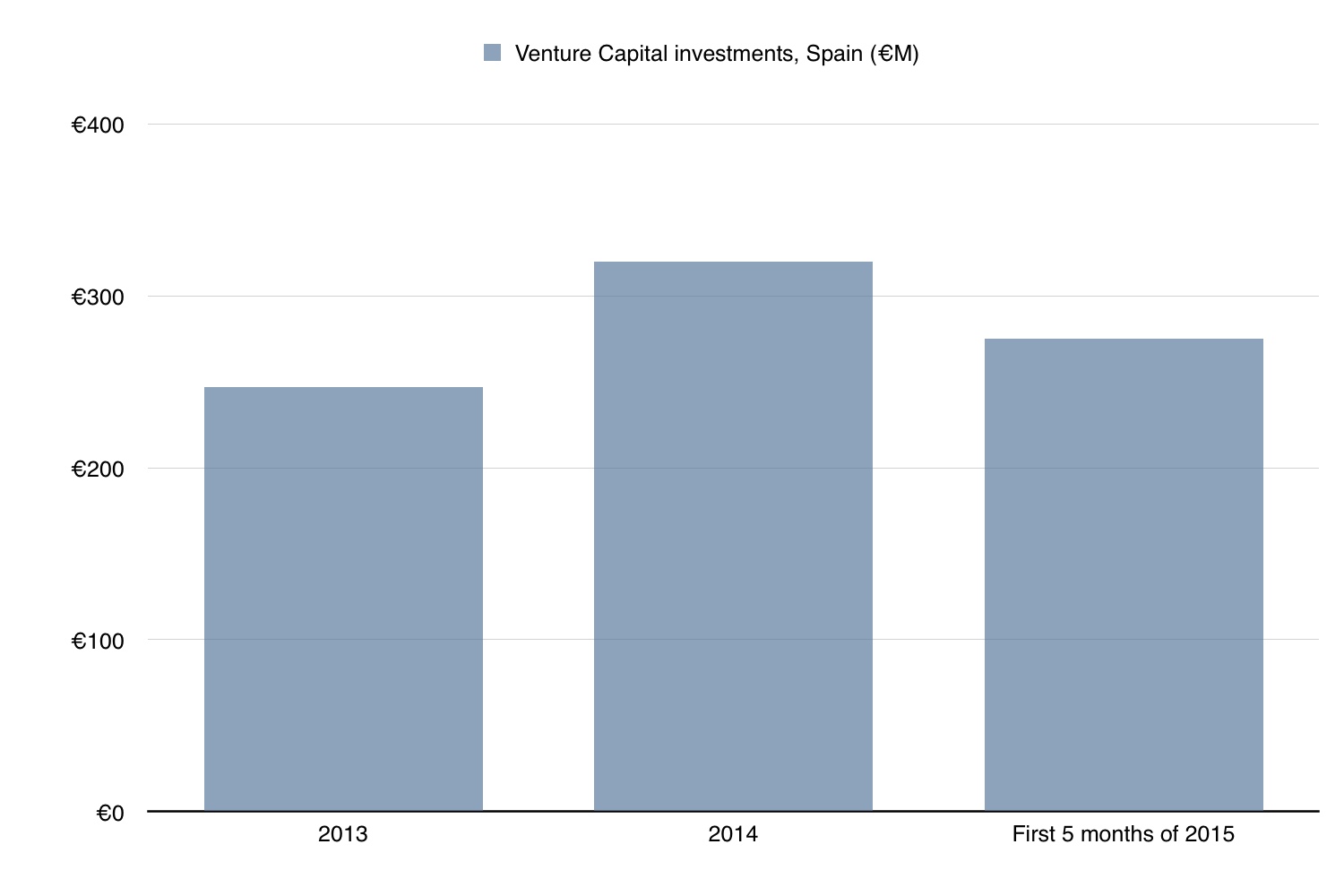 Spain launched two new types of visas two years ago: an entrepreneurship visa and high talent working visa which are quite easy and quick to get if you fit the criteria. There are more conferences and events for entrepreneurs; the largest one in Spain which takes place in Madrid during October is the South Summit – Spain Startup (another confession, I worked with them – amazing people with great vision to change the entrepreneurial ecosystem in Spain). The rent for offices are cheaper than London and with the new Google Campus you can pay only 250€ a month and be in one of the best places in Madrid. There are of course cheaper alternatives as well. Some of the incubators such as Area31 in the IE Business School will allow you to work with international teams for free if you get accepted. If you are interested to know what’s going on in the Spanish ecosystem follow Alex Barrera, one of the most prominent people in the startup world here. Besides him you should read and follow NovoBrief.com written by Jaime Novoa which tracks and publishes everything that goes here in English.

you already know that Spanish artists contributed to and changed art history; Goya, Velasquez, Picasso, Dali, and Miro to name a few passed through Madrid at one point of their. The Prado and Reina Soifa are among the most amazing museums in the world. Yet, besides the city’s roots in the art history – you would love the city! Madrid is very designed oriented. Stroll the city streets, see the stores, the cafes and young designers and you will understand what I’m talking about. Is it just a coincidence that SelgasCano, Spanish architecture office, designed both Serpentine Summer Pavilion 2015 and Second Home, the creative incubator launched by Silva, both located in London? Maybe it is, but it definitely shows about the Spanish activity. There are beautiful and great studios here. You can rent one of these studios right in the middle of the city or outside. The galleries that speared around the city have growing international exposure (You can read here more about leading art galleries in Madrid). Ivory Press, the publishing house that was launched in London in 1996 by Helena Ochoa Forster has three offices: London, Madrid and Switzerland but only one gallery – guess where? Yes you guessed its Madrid!

The list goes on and on, yet I hope you get the feeling of Madrid. When I arrived Madrid in 2013 I read Sam Cookney’s story the Huffington Post. I was surprised because Cookney is living in Barcelona and working in London – sounds a bit strange right! Live in Barcelona and work in London. Today, I’m not surprised at all. Why did he do it? Cookney mentioned some of the reasons, I mentioned others, but I will let you read Sam Cookney’s story.

Now, I’m not trying to say that Madrid has much more than London in tech, art or other life aspects or fields. It’s not for me to decide, everyone choose their place of living by different criteria. Though, I think that it’s always good to know about alternatives and in my opinion Madrid is one of the best alternatives you can find.

Have questions or comments? Contact me at [email protected]