On Friday, December 9, 2020, Airbnb went public. One of the unique unicorns of its time, Airbnb quickly stabilized on a market value of almost 100B$.   While it is a tech company, Airbnb’s founders are not. In this episode, we share the art behind the Airbnb story and how two founders leveraged their creative background to build this company. 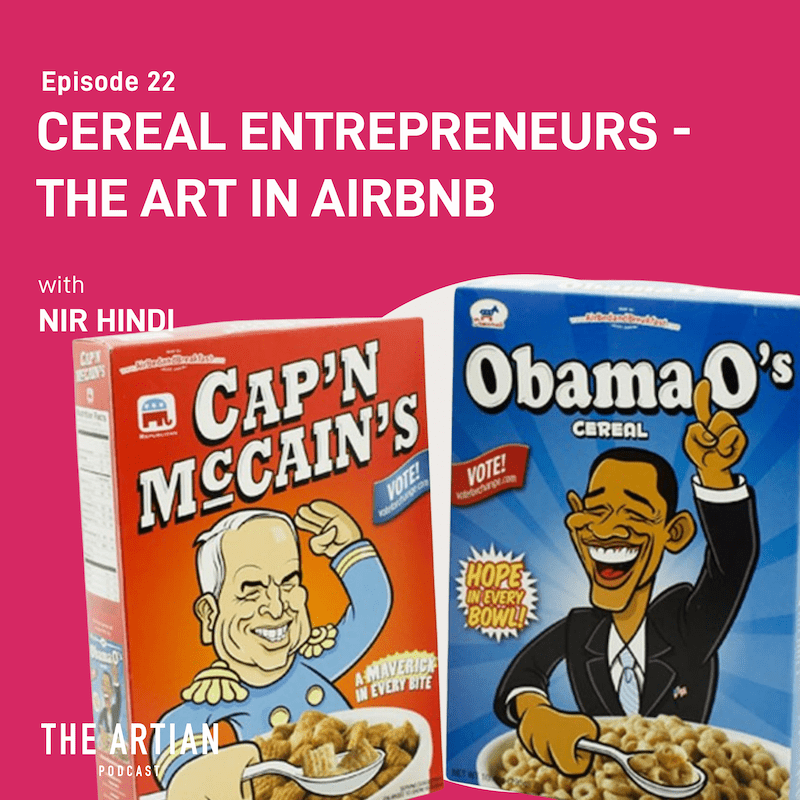 Sources that were used and mentioned in the preparation of this episode:

Credits for interviews and recordings:

The transcript was produced by an AI, mistakes might appear.

Hi podcast listeners, today is a special episode about one of the companies I love – Airbnb. Last week, Airbnb went public, and its market valuation while recording this podcast was approximately 85 Billion dollars.

Now you might ask yourself why recording an episode about Airbnb, right? Ohh…good question. Because the founders of Airbnb, Brian Chesky and Joe Gebbia, are not your typical founders, and this is where art comes in.

Now, I am not going to bore you with the whole story of Airbnb. You can listen to many wonderful interviews out there – one worth mentioning is How I built with Guy Raz. I will add the links on our website. in this episode, I want to focus only on the role art and creativity played in Airbnb’s success story.

In order to do so, I want to take you back to 2008. Chesky and Gebbia launched the website – back then called Airbedandbreakfast.com. In August 2008, the venture got into turbulence. They got some booking but sank into a period with no booking at all. A few months before, even their third co-founder Nathan and their lead (and only) engineer had moved back to Boston.

Chesky and Gebbia, running out of money, needed to act fast – what they can do to sustain the business. Their goal was to get another 25,000$ that will help them develop the business.

The team decided to become “a cereal entrepreneur,” as Chesky defined it. Now – cereal, my friends, not with an S, with a C. Yes – cereal – the typical breakfast you are familiar with.

Now a reminder – it was the 2008 United States presidential election. Barack Obama runs under the democratic party to his second term against the Republican John McCain.

Chesky and Gebbia came up with a brilliant idea – to create two cereal boxes: Obama-Os’ and Cap’n MnCanis. The pair produced the graphics, found a box supplier to print and cut 1,000 boxes – 500 of each, glued the boxes together by hand, and filled them with generic cereal bags. Then they delivered it to the newsrooms – it became a hit instantly

Despite this fantastic move, three months later, in November 2008, the team was still struggling to attract booking on their website. Justin Kan, a tech entrepreneur, who advised the team, suggested they apply to YC.

YC is Y combinator, and If you are in the world of startups, you probably know it.  Y Combinator is a Silicon Valley legendry startup accelerator that accelerated companies like Dropbox, Stripe, Reddit, and many others. YC is perhaps one of the world’s most famous startup accelerators, if not THE most.

With Kan’s recommendation, the team faces two options – apply to YC or just Shut down the business.

But like in life, the team misses the final date of the application.

Kan wants to help the team. So what does he do? He writes to Paul Graham – YCombinator co-founder (and a painter, if I may add – but this is a topic for a separate episode). I want to read you the email exchange between Justin and Paul Graham so you can understand how easy it was to miss Airbnb.

Chesky and Gebbia applied. Now they need to wait.

They are invited to an interview with Paul Graham and his team. They are doing the interview. And before leaving the room – they leave a box of cereals to Paul Graham.

In Harvard Business Case about Airbnb, Graham commented: “ we didn’t love the idea of renting spare rooms to strangers. It seemed odd, but as soon as we saw the cereal boxes, we knew we were going to take them.”

Now, do you remember that I started saying art is relevant here? Well. It is. Both Joe Gebbia and Brian Chesky are not your typical founders. They both have a bachelor’s in fine art.

In a conversation with Chase Jarvis, Gebbia described his relations to art.

Chesky as well had an affinity for art. As a child, he was interested in art, drawing replicas of paintings, and redesigning shoes and toys.[7] He would disappear to the local museum for hours to draw replicas of the paintings. He later became interested in landscape architecture and design.[8]

His passion for the arts made him apply for the Rhode Island School of Design (RISD), where he met Joe Gebbia, who would later be his co-founder of Airbnb.

Now you can see how this artistic creativity played well for them in building Airbnb.

Let’s go back to their time at YC because this part, I believe, is what we all need to learn from.

While in YC, Chesky and Gebbia travel to New York to meet users. Paul Graham recommended them to meet one of his colleagues, the investor – Fred Willson.

To help them do it, PG sends Wilson a quick email that says:

One of the startups from the batch that just started, AirbedAndBreakfast, is in NYC right now, meeting their users.  (NYC is their biggest market.) I’d recommend meeting them if your schedule allows. Be sure to ask about how they funded themselves with breakfast cereal.
There’s no reason this couldn’t be as big as Ebay. And this team
is the right one to do it.

Thanks Paul
We are having a bit of a debate inside our partnership about the
airbed concept.

At this stage, encourages Wilson to have the meeting in any case.
In another email, he responds to PG:
I met them today
They have an interesting business
I’m just not sure how big it’s going to be
fred

Now, why I’m sharing with you these emails exchange? Because in March 2011, two years after the meeting, Wilson published a remarkable post about missing Airbnb and humbly share his thoughts:

Here is what he wrote:

The Airbnb founders came out of the winter 2009 Y Combinator class. They came to see us during their time at YC. They told us about a great stunt they pulled at the Democratic Convention in Denver.

At that time, Airbnb was a marketplace for air mattresses on the floors of people’s apartments. Thus the name. They had ideas for taking on other listings but they had not yet made much progress on them.

We couldn’t wrap our heads around air mattresses on the living room floors as the next hotel room and did not chase the deal.

What is Wilson’s lesson:

We made the classic mistake that all investors make. We focused too much on what they were doing at the time and not enough on what they could do, would do, and did do. …. we don’t always get it right. We missed Airbnb even though we loved the team. Big mistake. The cereal box will remain in our conference room as a warning not to make that mistake again.

Wilson, I would assume, was not the only investor to skip Airbnb. While Wilson didn’t see the idea’s potential, I guess other investors didn’t see Chesky and Gebbia’s background as an advantage. Actually, Chesky reflected on this in an interview, saying, “Our backgrounds were considered a liability when I got here (Silicon Valley). A lot of investors did not want to invest in us because of who I was. Going to the Rhode Island School of Design wasn’t an asset.

And this is why I recorded this episode. We so often tend to look for the formula of who will be a successful entrepreneur. We so often don’t think about artists and creative as potential multi-billion-dollar founders. But Chesky and Gebbia are an excellent example for the artists-entrepreneurs type – they are not the only ones, I promise you that.

So next time you have an art school graduate on your doorsteps – do yourself a favor, don’t rush to throw them out. You might get yourself an 85B company.

Though I don’t know Brian and Joe, and we never met, at least for now, I want to say thank you for the great work you have been doing and for never giving up on the art. I hope we can catch up for a conversation at any point.

Next week will be our final episode for the season. I can’t believe how quick it was. Until next week, have a wonderful time.