Innovation Through an Artist’s Work

I look at artists as creators and inventors and always draw inspiration from them. There are many lessons that innovators can learn from artists and it is no wonder that scientists find inspiration in art. Last March I visited Fundacion Juan Miro in Barcelona. During my visit to the Museum, I saw the Mercury Fountain by Alexander Calder, a sculptor and one of Miro’s friends. I was fascinated by the sculpture I saw.

I stood there for a long time watching the movement of the liquid on the surface and was hypnotized by its elegance and beauty. It made me curious about Calder and I wanted to learn more. Coincidence or not, a retrospective of Calder opened at the Tate Modern in London two weeks ago and I was fortunate to visit the “Alexander Calder – Performing Sculptures” exhibition (see below a short guided video introduction by The Art Channel)

It is a beautiful exhibition!

I can speak and write about the works I saw but you can find information about it online; I want to talk about innovation through the work of Calder.

Alexander Calder (1898-1976) was an American artist who came from a dynasty of sculptures. His mom was an artist and his father was a sculptor. It is no wonder Calder also chose this path in the end. Though he was involved in art, for most of his life, after graduating high school Calder decided to study mechanical engineering. He worked as an engineer for several years before leaving to study art. Once he chose to devote himself solely to art, Calder became prominent and famous among the avant-garde artists of the ’20s and what made him so influential is the fact that he was an innovative artist.

Calder’s innovative use of materials, gracefully moving mobiles, and startlingly unique stabiles made him distinctive and a pioneer in his field. His works concerned with space, motion, and the relationship between the viewer and the artwork advanced modern art. His unique combination of creative exploration spirit and engineering allowed Calder to modernize the art of sculpture.

Calder’s innovations started with the material. At that time the common practice among sculptors was to work with rigid materials – wood, bronze, or stone – so when Calder started his career and chose to use simple industrial materials: steel, aluminum, and wire, it looked fundamentally new. “Calder was a sculpture of line rather than mass, which critics defined as ‘drawing in space’” – a beautiful description written at Tate’s guide. These fabulous gentle sculptures were characterized by free motion, transparent for the viewers to see through them, and made of wire.

It was not until the 1930s that Calder created his real breakthrough. The triggers for change in thinking that leads to innovation can be internal as well as external events. Calder’s case was the latter. After a visit to the studio of the artist Piet Mondrian, one of the pioneers of geometric abstraction, Calder changed his direction of work toward something new. He described it:

This one visit gave me a shock that started things.

Mondrian’s refusal to consider movement in artwork made Calder take the challenge to combine movement with abstraction and it is his ability to incorporate actual movement into a sculpture that made him important.

This “challenge” led to the development of what we all know today as the “mobile”, a phrase coined by his friend, the artist Marcel Duchamp. These experimental sculptures, an art form that did not exist prior to his creation of it, became what we can call a “classic mobile”:  a network of combine colored pieces, hanging from the ceiling, connected in wires, and balanced by weights of each other. While experimenting with the free movement he also experimented with sculptures that had a small engine, an approach that allowed the viewer and the creator to predict the sculptor’s movement; “with a mechanical drive, you can control the thing like the choreography in a ballet” he stated back in 1937.

At a certain point, Calder realized that the opportunities that lay in a free-moving sculpture are much more interesting and large in number; it was only than that he started to create and develop in-depth the beautiful mobiles that so associated with him.

These mobiles’ movements, which are influenced by their surroundings, are beautiful and delicate. When looking at Calder’s works hanging from the ceiling, floating and moving in an unpredictable, weightless movement, lightly, beautifully – one can’t avoid being dazzle and hypnotized. Their fragility combined with complexity just creates more tension in the viewers’ eyes – will this system of masses and counterbalances hold?

His exploration of movements and sounds didn’t stop in sculptures. The changing and unpredictable movement of Calder’s works influenced music composers to experiment with what is known as “open form composition”. This method “includes significant parts to be formed by live-processes during the performance” (definition by Thomas Körtvélyessy). Like the mobiles which have unpredictable movement and sounds, open composition pieces allow a certain level of randomness determined by the musicians while they play. So when the composer Earle Brown suggested a collaboration, Calder was intrigued. Brown was a major force in contemporary music and the American avant-garde and the creator of open form.

Brown described his idea for the piece:

I began the work for the quartet with the idea that it would be “conducted” by a mobile in the center of the space with the four percussionists placed equidistantly around it, the varying configurations of the elements of the mobile being “read” by the performers and the evolving “open form” of each performance different and changing perspectives in relation to it. 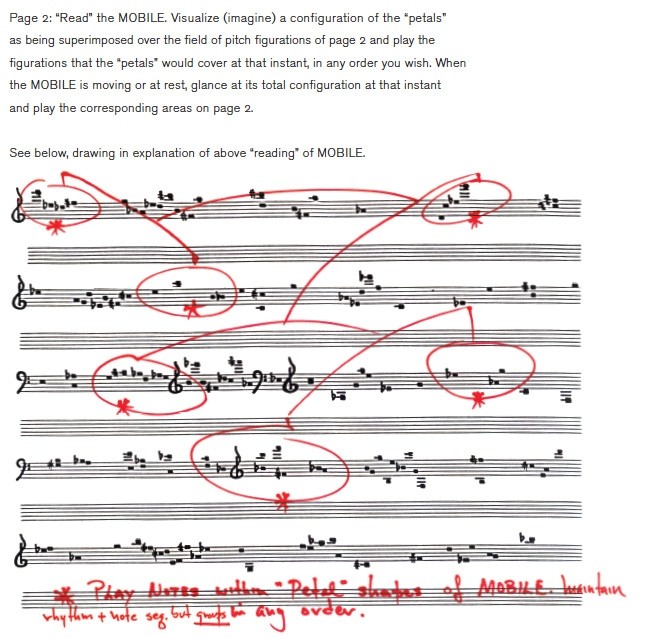 The collaboration included a special mobile Calder created and which he named Chef d’ Orchestre. The CALDER PIECE, as it named by Brown, was first performed in 1967, Paris. The Tate Modern hosted two exclusive performances of the Calder pieces. By challenging existing principles of modern sculpture and using his exploration, proactivity, curiosity, and bravery skills became Calder the most innovative sculptor of the 20th century.