On Thursday, January 16 the IE art and business club had its first event for 2014. We had the honor to be hosted by José Manuel Ciria.

José Manuel Ciria is one of the most outstanding artists of his generation and a key figure in the heterogeneous panorama of Spanish painting during the last three decades. Since 1984, when he had his first solo show at the Ferrière gallery in Paris, Ciria has developed a broad career and has been honored with numerous awards and exhibitions.

Ciria deals with conceptual as well as abstract art; his unique style presents the tension, one can say, between formal shapes (rectangles, squares etc.) and a passionate realization on the canvas.

Last year a documentary film on Ciria’s life was released and screened at the Moma. Ciria “agreed to appear on camera for the first time for a film by filmmaker Artur Balder. His follow-up, Ciria pronounced Thiria – a documentary film, is exactly that: a thrilling document of Ciria’s creative process, juxtaposed with intimate conversations (with his collectors, his collaborators, and the American critic Donald Kuspit) and rare archive material.” 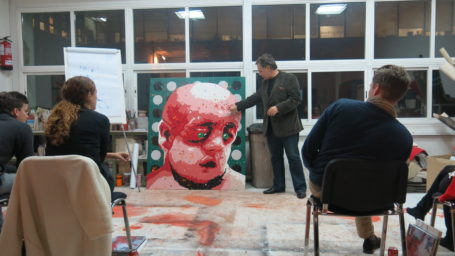 Ciria spoke with our club members for two hours about the creative process, inspiration, and art. The interesting conversations, in my opinion, can be summed up in one short discussion we had. The question Jose was being asked dealt with the creative mind and the implementation and execution of ideas: “do you ever run out of ideas for new works? Inspiration?”

Ciria replied and described his way of thinking of new ideas saying that he has many ideas every day however fewer hours a day to execute them. The way he describes the creative processes reminds me a lot of the way entrepreneurs think. For me, this is what is at the core of the relationship between Art and Business – the creative mind.

I recommend you go see the Ciria exhibition when you have the chance. But more importantly, if you ever have chance to hear him speak, you should do so.

Read an interview with Jose HERE.