I’m meeting Enrique on a rainy winter day in his Madrid’s home studio in a rising neighborhood that used to be the Jewish quarter and now has become the focal point for immigrant populations with residents from the Indian subcontinent Chinese, Arabs, and Senegalese. The neighborhood is changing and many artists live there and young people move there, it is full of cozy bars and cafes next to immigrants shops. The cold day is changed with a cozy and homey feeling in Enrique’s studio/home. The house is just as I imagined –full of books, plants, an eclectic collection of furniture, and craft tools. At the entrance on the wall, there is a large wood-made sign of USB which appears in one of Enrique’s works as a symbol for the new religion – technology. Though he lives and works with technology the house is technology absent. Enrique made us tea and we step into his studio…

The studio is big chaos – colors, paintings, tools, computers, woods, and others materials. It’s a space that someone is working and it is evidence for an active artist. He was just working on a large project for ARCO, the national Spanish Art fair, which will open at the end of February. It is our third meeting and every time he succeeds surprising me with the way he thinks and what’s motivating him. Enrique works with HTML programming, installations, and drawing techniques to explore the border between the digital and the analog worlds – he kind of chose to live in the limbo, which makes it so interesting. By doing so, he creates an ever-increasing field that allows him to comment on the technological progress as a reflection of the social and financial evolution, and therefore the relationships between temporality and technology. We sit for a conversation to learn more about him, his philosophy, and his art.

The Artian: Enrique, you investigate and explore the border between the digital and the analog worlds – why you chose to be in that space?

Enrique Radigales: It was kind of a revelation: when I finished my painting studies (1995), I wanted to expand my artistic training and started two courses: one on engraving techniques at the Escola Massana (Barcelona) and then a post-graduate course at the Polytechnic University of Catalonia about Authorware, a graphical programming language. In the morning I was studying a new language at the university and in the evening I was drawing with a stylus on a copper plate. These were two different experiences in time and informs: in the morning I was composing sounds and images on the screen (I had never touched a computer before) and in the evening I was scratching a sheet of metal. One afternoon it occurred to me that I made a mistake with the keyboard’s key, scratching a space that should have been blank, and unconsciously pressing the ⌘Z aiming to fix the mistake.

At that moment I stopped, having had my first experience of virtual consciousness. I left the stylus on the table and left the engraving classes. It was like starting from scratch. New rules for a new language of communication…

TA: You live between the world of artists and programmers…how you define yourself, a painter or a digital artist?

ER: I do not know, sometimes I think I am a digital artist who thinks like a painter, and other times a painter who is influenced by digital techniques. In any case, it seems like antagonistic activities; we have the typical image of the painter in his studio, isolated from the world and obsessed with his work, while the digital artist has other skills: more proactive, communicative, and aware of what is happening, although they are also locked in front of their screens

TA: You explore the progress in technology and some of your projects, like ideal word, are programmed and based on technologies from the ’90s. In that sense, you are kind of a live museum for technologies.

ER: Maybe, but I have other projects in CD- ROM format that can only be seen with specific hardware, or projects programmed in ASP Net. art which I have lost between servers migration. This is another dark side of technology: the lack of genealogy. The technology industry is no friend of nostalgia, even if it is just a simulation

TA: What is actually Idealword project? 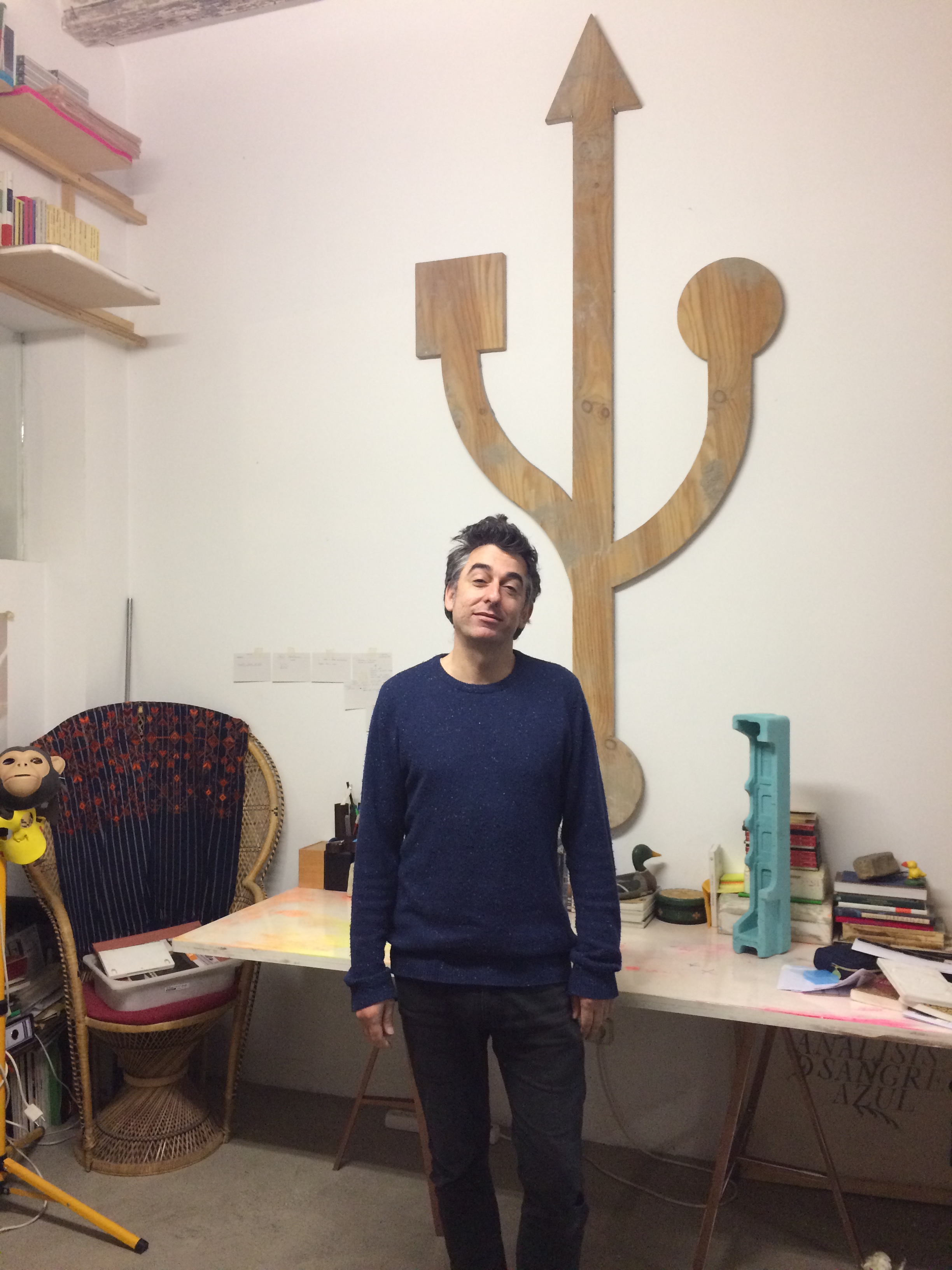 ER: During 2003-2008 the project idealword, which belongs to Net. art functioned as a kind of an illustrated diary, where I reflected on the uses of technology and its influence over the way we interact, work and use our leisure time. But I was mostly interested in exploring the border between the new virtual world and the old physical world. A blurry border, a no-place that could give us the keys to understand our relationship with the machines.

When I started the project in Glasgow, I was still connected with a 28000 baud modem and even the web content was designed for a screen with a resolution of 800×600. Formally, I wanted to technically transcend these limitations, so I developed a technique of digital drawing (MouseStrokes) that allowed me to draw on the screen images without collapsing the width of the sides. I also used the source code as another graphic element, which allowed me to expand the meaning of the content.

Another feature of idealword.org was that the entire content on the display could be printed for free in a DIN-A format. At that time I was heavily influenced by the flow of the free movement of knowledge, such as the Copyleft, and later by Creative Commons licenses. That allowed idealword.org drawings to be published on digital platforms as well as in print publications.

I was looking for a homemade digital aesthetic as an amateur HTML programmer. That allowed me some autonomy in production without a team of programmers and designers. I wasn’t looking for a surprising interaction, but rather a user experience that would be closer to the contemplation of a picture than to an interactive project designed in Macromedia Flash. I carefully kept a record of the monthly sent emails, updated information on the project, and people and platforms that were related to art and design, in a time when there were hardly any spam platforms. So, the connected community was receptive to this type of project, which allowed idealword.org to become popular outside of the micro scene dedicated to art and design. At that time I was spending a lot of time in front of the screen…

TA: A part of your work reminds me of ideas that I heard from Douglas Rushkoff – that we use technology without understanding it – that many of us are digital literacy. What do you think about that?

ER: I think that in just a few years we have been forcibly “educated” by the technology industry, which does not mean that we are digitally literate. We have suffered a digital transformation, passing from the ergonomic mouse and graphical interfaces to managing our lives through multiple touch screens.

I think that one of the errors about digital literacy is to think that free internet access around the world is a moral obligation. Digital literacy brings extraordinary knowledge –  there is no doubt about it – but it also creates an economic virus that mainly favors the more developed countries.

Projects such as the social network Free Basics, which give free coverage to some internet content in the process of “developing” countries, remind me of the first evangelical explorers, who, using the excuse of bringing civilization to indigenous peoples, ended up transforming their culture, knowledge, environment and the way of a cyclical, balanced and sustainable living. Because technology tends to develop by its own principles and laws, which, paradoxically, have a very different growth pattern of the way human beings grow.

TA: You research the progress in technology and your project “12 meters of landscape” is a part of it. What did you discover through this project?

ER: In this project, I wanted to talk about the internet’s neutrality, walk over a landscape of content that is free and accessible to all internet users. The project consists of two parts, a physical one – a print of twelve meters, and another in HTML format with images from the internet related to the word “landscape”.

In the physical version, I looked for images that relate to the word “landscape” and after I combined the images in a 12-meter document which was printed in one-time on Hahnemühle paper 310 g (that by itself was an adventure…). After the printing, I intervened with acrylic paint. The device was formalized following the topography of mountains, valleys, and plateaus, using various media such as wood, string, and cardboard tubes. 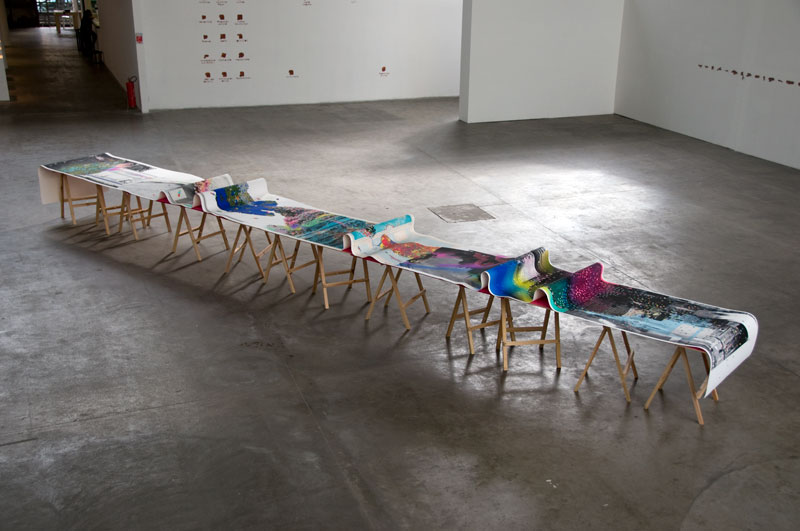 In the digital version, programmed in JavaScript, one can see an order of images related to the word “Landscape” that are loaded consecutively from top to bottom until it arrives to twelve meters long of chained images. What I thought was interesting about the digital version, was that many of the appeared images don’t have a consistent relationship with the idea of landscape. For example, sometimes you can find a photograph of a forest or a river, but sometimes you can see a cat walking on the grass, a cemetery or a fashion photograph. For me, this disorder and unrelated images create a poetic context that represents net neutrality.

ER: I think the conflict itself is the benefit: being born and growing as an analog person absorbed by a digital environment. I also believe that my geographical context has much to do with the conflict: to be born and to live in Spain, which has a series of deep-rooted traditions with a cultural structure that is struggling to assimilate the change, and a way of life so close to the physical, to body contact, to human relations… the truth is that I prefer to continue living this conflict…

* Thank you Inna Barak and Marián Paynter for assisting us with the translation.