Renaissance Florence as a Model For Innovation

We have been writing about the need to revitalize the arts and science practically as it has been shown in renaissance Florence. Leonardo Da Vinci is a great example – putting innovation, engineering, math, and science together.

From the ancient past to the present and even in the future, the role of Renaissance Florence in human life will be found equally important. These great artworks and great ideas are still influencing our lives today; some of these ideas are so embedded in our modern society that it seems that they have always been there. Not only social and cultural ideas but also business and industrial ideas of that time that have a deep-rooted impact on modern life. An example of one idea is the patent system, as the first patent (Britannica) for an industrial invention was granted in 1421 in Florence to the architect and engineer Filippo Brunelleschi. It’s an interesting fact that the pattern of acknowledgment of the inventor’s effort in form of the patent was taken by the European countries from Italy in the next two centuries.

Countries and cities are trying to create and encourage creative and innovative environments. Every responsible nation is trying to create a suitable environment for ideas to flourish. Silicon Valley is a great example of these efforts. However many researchers are still wondering how Florence became a unique creative hub in the 15th century that produced such vibrant, innovative and brilliant talent. The questions include the practicality, clarity, and credibility of ideas of that talent. In his article at Harvard Business Review, Eric Weiner makes the plausible case that Renaissance Florence was a better model for innovation than Silicon Valley is today, and here is why:

Weiner says “In today’s culture, we tend to value youth over experience and have little patience for old-fashioned learning models,” The distinguishing feature of renaissance Florence is that, in Renaissance Florence, the artists sought to learn from the masters and not disregard their experience. “Some of the greatest names in art and literature willingly paid their dues, studying their craft at the feet of the masters.” Leonardo himself spent ten years working at Andrea Del Verrocchio’s, a businessman and an artist, workshop. Why ten years? Because Leonardo who could easily found another place to work with his talent “valued the experience he acquired in the dusty, chaotic workshop”.

It is probably due to the Medici’s, the Italian bankers ‘family that we are lucky to see the artworks and ideas’ presence today. The Medici’s were devotees and great patrons of these creative talents. From all the family members, it is one Medici that stood out Lorenzo the Magnificent, as he was called. It has been said that while walking on the streets of Florence he saw a boy sculpting, he was impressed that

He invited the young stonecutter to live in his residence, working and learning alongside his own children. It was an extraordinary investment, but it paid off handsomely. The boy was Michelangelo. The Medicis didn’t spend frivolously, but when they spotted genius in the making they took calculated risks and opened their wallets wide. Today, cities, organizations, and wealthy individuals need to take a similar approach, sponsoring fresh talent not as an act of charity, but as a discerning investment in the common good. 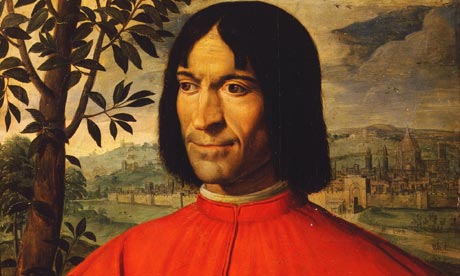 One of my favorite points in his article was about how Potential trumps experience. So often I come across companies that are looking for the “right” experience or the “right” track record nevertheless in order to accomplish great achievements you need to take risks with the non-conventional individuals, the ones I call – the misfits. Weiner used the Sistine Chapel case as an example to elaborate on the point.

When Pope Julius II was deciding who should paint the ceiling of the Sistine Chapel, Michelangelo was far from the obvious choice… Still, the pope clearly believed that, when it came to this “impossible” task, talent and potential mattered more than experience, and he was right. Think of how much that mindset differs from what we do today. We typically hire and assign important tasks only to those people and companies who have previously performed similar jobs in the past.

Weiner continues and elaborates more curious points on Renaissance Florence as an innovation hub. I hope that managers and policymakers will find his article an eye-opener. As a manager you might want to consider looking for these “Renaissance individuals”, the people with different experiences, multi-dimensional knowledge, and multiple talents.

Some will agree with Weinter, some won’t. In any case, his article is invigorating and interesting, especially the readers’ responses and comments. It was published on Y-combinator’s blog as well. Y-combinator is a Silicon Valley based-incubator that is considered to be the best startups incubator in the world. Its community mainly consists of international entrepreneurs, thus reading their response to the article is impressive. The debate that has developed in the blog about the role of Silicon Valley as an innovation hub vs Renaissance Florence is stimulating and thought-provoking and you can read it here.