Working With Robots – an Essential Skill to a Tech Future

Back in the day, when we thought of robots and AI, we didn’t necessarily think about creativity. Instead, we used to imagine something cold, hard, and rigid. Something that is programmed in a routine and does not have the ability to truly think for itself. Because of this, we thought that creative roles in the business world and creative industries were safe from the technological revolution. In many ways, they still are.

But this is only true for today, and nobody can predict the future. Lately, we are hearing more and more about robots being involved in creative fields, even creating works of art. The research area of computational creativity has shown just how far we’ve come in terms of machines’ capabilities in that aspect. They are increasingly able to make creative works.

So how does this burst of creativity affect the business world? If new technologies are giving robots the capabilities to work in creative fields that often require human understanding and demand cognitive skills, you can imagine the influence on other fields of business.

In 2015, this possibility became a close reality. That year, the Digital Creative Director for advertising agency McCann Japan and founder of McCann Millennials, Shun Matsuzaka, created the first AI Creative Director. He planned to have the machine compete with human creativity to direct the best TV commercial.

With his team, he created an algorithm that analyzed other TV commercials and what made them successful. Then they ran the program, which resulted in a creative brief. A human creative director then made a creative brief of their own for the same product that functioned as the human control in the experiment. Then, both briefs were executed by a human team.

Ultimately the human-created ad won after a nationwide poll. However, the margin was slim, with 54% of the vote. And only after one try! Imagine what could happen if the technology was given more chances to improve.

The World Economic Forum’s Future of Jobs Report mentions that about 85 million jobs will be displaced by 2025 due to shifts in labor from human to machine. But this also presents an opportunity, since they predict that 97 million new roles will be created in the field of managing the division of labor between the two.

This is why creativity and originality are ranked among the top 5 skills for 2025. Matsuzaka and his team had shown that even though human creativity had won, technology was well on the way to catching up. Success, then, lies in our humanity, in our ability to be original and to be more creative and innovative than emerging AI.

But it also means not only leveraging our human ability to maintain an advantage but also that we must learn to collaborate with technology. While creativity is what can differentiate us from machines, Matsuzaka’s experiment shows the creative potential of collaborations – not machines against humans, but rather humans AND machines.

A study of 1,075 companies found that their AI initiatives’ success increased in correlation with how involved humans were in the process. The greater the human collaboration, the higher their overall performance.

And our ability to be creative does not mean only coming up with new ideas. There is so much more to creativity, especially human creativity. The World Economic Forum defines creativity as the ability to observe and analyze issues and problems around us to come up with solutions. It also means we can pivot according to environmental change, make spontaneous decisions, and discern meaning.

In this way, machines are still limited. Even though Matsuzaka’s machine created an interesting commercial, it still needed to be put together with human hands. His team had to input years’ worth of data into the system for a frame of reference. And, once the system finished producing a creative brief, that brief still needed to be executed by humans.

Without an algorithm, without a set of rules or examples to work from, the technology can’t execute properly. It is missing the human ability to make a spontaneous, creative decision – at least for now. And, without a human-centric focus, it won’t be able to fit into society either. Would you like Siri’s technology to be completely robotic or do you appreciate her soothing tone of voice? Don’t you prefer a human customer service representative over a robotic one?

How can we have human-centeredness without humans? It is impossible. Humans still need to be factored into the equation.

Even “Blue Jeans and Bloody Tears,” the first Eurovision song formulated by AI, had to be tailored to fit human tastes. Artist and software developer Eran Hadas, who was part of the project, spoke of how although music and lyrics were computer-generated, the words were matched to the melody by humans.

To be appealing to humans, the song needed to be put together by humans – it still needed a hands-on human team.

Matsuzaka explained this idea by saying, “we are still in the human world. So a lot of things that we do is to make humans happy or to make our world a better place…as long as we are still communicating with humans in a human society, I think humans will be better. And then we use machines, AI and robots to support or co-create or co-work together.”

Artist Madeline Ganon also understands the concept that humans and robots need to work together. Through her work, she manipulates large-scale industrial robots to have familiar features. Instead of making them look human, she knows how to program them to make their behavior recognizable to us, lowering our fear of them a little bit. Her robots give the impression of metallic puppies, following our movements in an almost inquisitive way.

Because they are more familiar to us in terms of their behavior, Ganon’s robots tend to have a more positive reaction from people. It goes to show the importance of human-centeredness in technology design, something that can only be achieved with a human acting as the robot’s brain.

In fact, many modern artists are currently using technologies in breakthrough ways, pushing their designed purpose beyond the limit. We can see this in the many applications artists develop for technology during collaborations or residencies at research centers.

For example, Stratasys’ work with artists using their 3D printing technology led to the development of 3D printed organs. The technology was not originally created for that purpose but a human had the idea to use the technology in an original way.

While a machine was a necessary part of this development and was needed to make it physically possible, it could never have been achieved without human thinking. It took a human with an idea to connect the dots.

What Are Some Steps You Can Take to Stay Ahead?

Stratasys’ work shows one way to better collaborate with machines – realizing that just because something is created with a certain purpose it means that we must use it that way. If we look at people like Matsuzaka and Ganon we can see that their creativity, and questioning way of looking at the world, helped them come up with new ideas for current technology. They were able to use the technology as a tool to create new uses for it.

The only thing that is certain is that technology will continue to integrate into our lives and workforce. We must learn and understand that robots and AI are tools to help us become more efficient. They can be a physical extension of our bodies, or a mental extension to help us comprehend things quicker. If we look at it this way, we might not be so concerned for a future with AI.

So how do we keep our creativity sharp and constantly evolving? How can we develop a mindset that will allow us to look at the world like Ganon and Matsuzaka? A look to the artists’ world might be one way. Their need to constantly create original work means that they are always thinking ahead.

Try to get into their mindset. Attend exhibits that may challenge the way you perceive something, see how far an artist can take their chosen medium or just listen to what they have to say.

Because artists are encouraged to stay curious and keep exploring they are not afraid to challenge the meaning of something. It is this proportion of 95% exploration that allows them to continuously create new things. Just because a technology is given a certain use, doesn’t mean it needs to only be used that way. There is no rulebook for it.

The prolific artist Robert Rauschenberg once linked the importance of curiosity and creativity, saying, “I think curiosity is probably the most important energy that any creative person can have.” He knew the importance of staying curious, and how being both creative and curious can push us to new places.

He knew that the world is full of surprises and opportunities. By learning to work alongside AI, we will be able to take full advantage of their capabilities by enhancing them with ours. 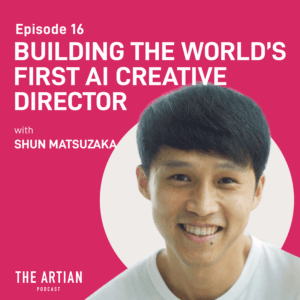 To listen to his experiences in fostering young entrepreneurs, tune into The Artian podcast!